An important – and often ignored – part of making a good world is putting in the people and cultures that inhabit it. While the game is fantasy and has things like magic, I like to ground our lore in some amount of reality. Doing this serves two purposes:

1.) The world seems more real. When you see things you recognize, you connect with it immediately, and your mind draws natural conclusions. A guy in a robe wearing a deer skull? Probably a druid. Half -naked man in a fur waistcloth with an axe, why, that’s a barbarian.

2.) With a frame of reference in reality and history, we’re able to write a lot of lore very quickly because it’s based on things that already exist. If we want to know how our barbarians behave, we look no further than the Ostrogoths or Visigoths. When a city is besieged, I can wiki what happened on Malta so many centuries ago. We don’t have to make as many things up, and again, a foundation in reality afford us realism that the imagination simply can’t match.

For Episode 3 (you’ll have to wait on the title), I’m looking at a few groups from Antiquity to throw in the game and build our own nations off of. Without giving away too much, I’m looking at mid – to late – Roman barbarian groups and came across two in particular: the Gauls and the Franks. While very similar at face value, these cultures had totally different societies, structures, names, weapons and armor, and combat tactics. 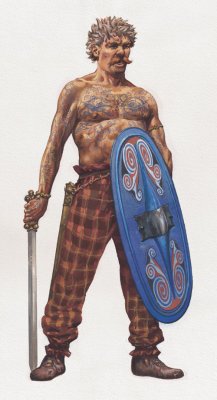 The Gauls are the people who would eventually become the Celts. When you shut your eyes and think, they’re the naked, screaming blue guys charging into battle against Caesar’s legions. I’ve even used a very famous Gallic – Roman battle to play an important part in the early game. These are a people with round shields, spears, and shortswords. Berserkers in the clearest sense. 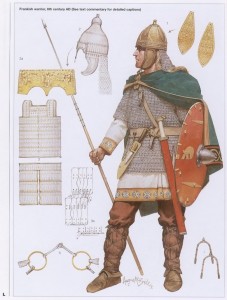 At a start contrast, the Franks (strangely, a Germanic tribe), are the fur – clad, mail – armored people you think about when you don’t know what vikings look like. Their primary weapon is an axe called a “francisca”, a tool so powerful they named themselves after it. The Franks were more organized, better equipped, and more calculating than their western cousins, and eventually drove them to Britannia, where Hadrian would fight them a century later.

With the history of the world as our backdrop, we’re adding a dash of fantasy to an already – cool reality. We want to bring the best experience in a package that you could almost inhabit, and if you’ve read the codex, I’ve written the world of Illyria to be functional and real.

I’ve swiped two groups from the pages of the past, but we’re always fishing for good ideas, and we always want to know what you think. Tell us about your favorite warriors in the comments, and let us know how we’re doing. In the end, it’s all for you.