A Mini Tale Set in Illyria 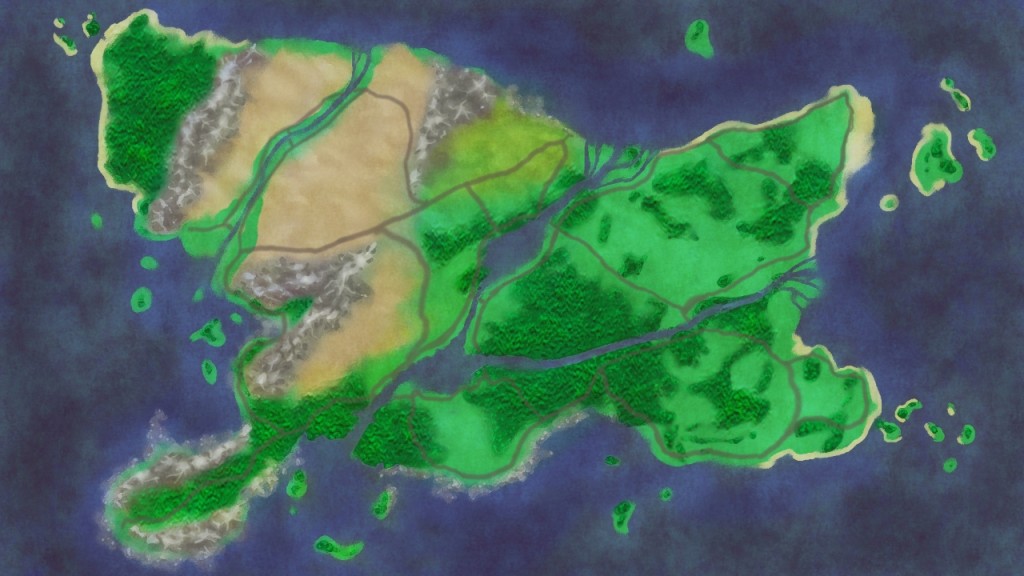 The young child panted as he chased his older brother up the forested hill.  It was the very hill that their father had taken them to the top of when they were even smaller, but his work in the fields kept him busier lately, so the boys decided to venture out on their own.  Little Rugnar set his foot on a tree stump and leaned into his knee to catch his breath.

“Weakness is no excuse, brother.  If you don’t push yourself harder, how will you ever grow strong?”  The younger cursed the elder’s words, struggling to pull himself up into the tree above.  “All you need is willpower and the proper mind, and you can accomplish anything.”

Rugnar’s sweaty hands gripped the bark tightly, but his arms were neither large nor powerful enough to properly wrap around the towering pine.  “I can’t do it, Marick.  I can’t do it.”

He buried his cheek into the wood, afraid to look up.  “I can’t see it.”

The younger did as commanded and let go with one arm.  He thrust it into the empty space between himself and Marick and immediately lost his footing.  The rest of his body peeled away from the bark, and he felt himself falling before he could even react.  He screamed.

Marick’s hand was like lightning, grabbing his sibling’s wrist and hoisting him to the upper branch and safety.  After dusting the lad off and letting him compose himself, Marick spoke once more.

“And there are times when your strength alone isn’t enough.  For those moments, you’ll always have mother, father, Annalise, Hanna, and I.  Your family will always be there for you.”

The child couldn’t help but smile at his older brother’s words.  The laughter was followed by a head pat, and Marick beckoned him further up.  From the top of the pine, the boys were able to look out over the massive Lake Tiberon.  Its placid and pristine waters acted as both quiet comfort and source of life for their village.  In the same manner, the very hill they were on stood like a watchful sentinel, looking out over the land and the tiny vale nestled in its bosom.  At its peak, Marick Darcidus rested in the crook of a branch, viewing the landscape.

“I know it doesn’t seem like it, Ruggy, but one day, I’m gonna rule over all of these lands.”  He looked to his sibling.  “You’ll be by my side, won’t you?  I’ll make you my chief advisor.  I can’t have a kingdom without my little brother with me, yeah?”

“No!  I’m gonna’ be king, and you can be my advisor!”  Rugnar stood up as straight and tall as he could without losing balance.  Marick laughed out loud, but that laughter quickly dissolved when his eyes turned toward the distance.

Both of the boys turned.  Off on the far edge of the land, nestled in a dip between two rolling hills, was their village.  Smoke poured up from its center.  And from the middle of that smoke- flames. 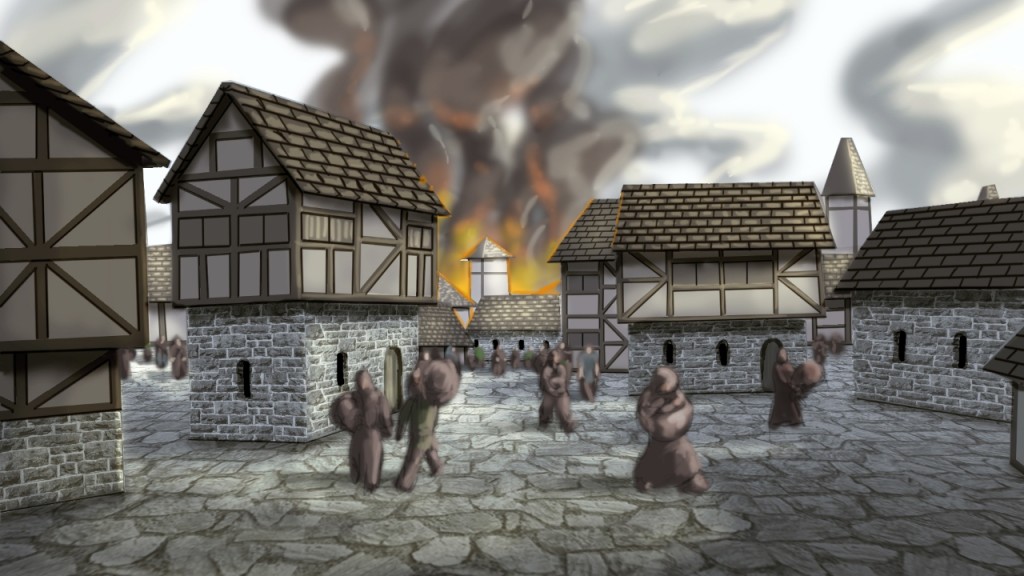 “Nooo!!  No, no, no, no, no!”  Marick shouted like a madman while his brother did everything he could to keep up.  By the time they reached their village, everything was totally ablaze.  A man they knew, a fisherman named Zarren, came stumbling from an adjacent street, his body littered with arrows.

He fell dead at their feet.  Worried for their family, the boys ran past the corpse and deeper into town.

Before they’d ever left the hill, they’d seen the smoke and fire billowing from the square and the church.  Their house had only been a few buildings away from the area, so neither of them was truly surprised at what they found, but both were still horrified.  Their house, their home, the only one they’d ever known, was engulfed in a rage of heat.  From the inside, they heard crying.

They heard the crying of two very young girls.

No words were said.  Both boys sprang into action, trying their hardest to break away the rubble that blocked the door.  Stones were removed, timbers were split, and Marrick kicked open the door just in time…. for a wall of fire to meet him.  And both brothers were cast back into the street.  And just like that, they lost everything all at once.

Rugnar was in shock.  He stumbled around, not knowing what to do.  He heard things very faintly.  His ears were ringing.  Marick didn’t have the same problem.

The lad stood up straight, grabbing a piece of a board with a burning end.  He stood.  He turned.  He ran headlong at the first fey he could see.

“You bastards.  You bastards!  I swear to the gods, I’ll kill you all!”

The board hit the raider in the arm, and he turned, seeming more annoyed than hurt.  It was enough, though.  He had a mission to complete.  A single punch sent Marick spinning to the ground, landing on his stomach.  He looked up at his little brother just in time for a sword to plunge through his back and out his stomach.  He shook for a moment, staring at his brother, shocked that he was meeting his end.

At eleven years of age, Marick Darcidus’ adventure was over. 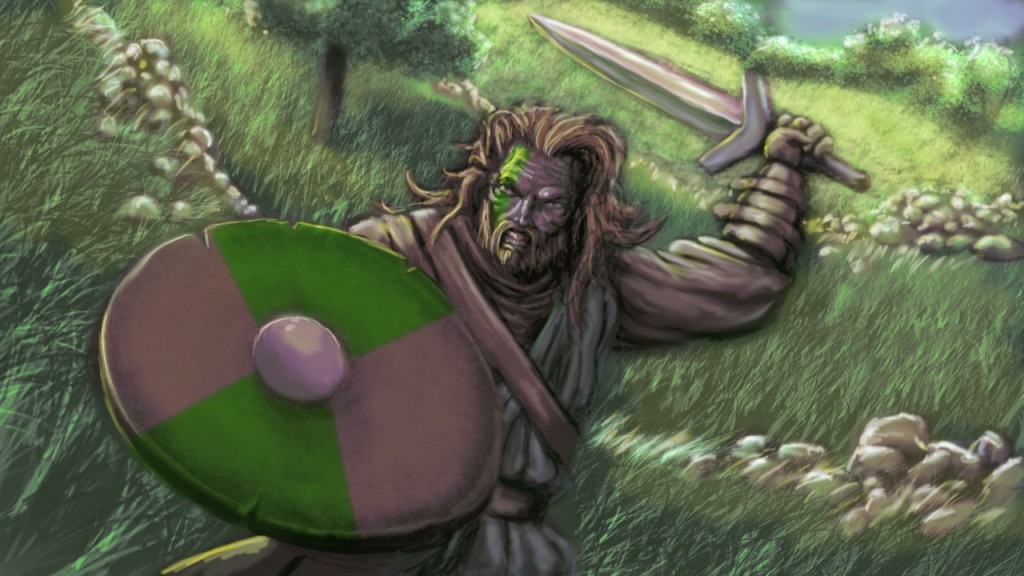 The slice of that sword was the loudest thing Rugnar had ever heard.  He was deaf now.  He was deaf, and he stumbled toward his brother and his brother’s killer.  About halfway there, he felt the ground shake.  He turned in time to see an armored horse trample over him, beating him to the ground and stepping on his right arm and left leg, breaking them at once.

He blacked out from the pain.

It was hours later when he drifted back to the world from some quiet and lonely place.  The first sense to return was smell, the smell of roasting flesh.  The second was taste, and he could taste the sweat of cooking human “meat” in the air.  The third was touch; he felt the crushing weight of corpses placed upon him, the corpses of his neighbors, friends, and loved ones.  The fourth was sight, the faintest flicker of sunlight appearing between a hand, a pair of feet, and the decapitated head that framed it.

Hearing did not return.

With one arm, the child dragged his way out from beneath the pyre of bodies.  When sunlight broke upon his tiny frame, he allowed himself to tumble down the mess of flesh to the dirt.  He leaned against a piece of wall, turning back to face three-hundred thirty-nine people who were burning to ash.  From the middle of that mound, near where he’d narrowly escaped, was the unmistakeable hand of his brother.

Rugnar didn’t cry.  He didn’t shed a single tear.  He was beyond it, beyond the world.  At six years of age, Rugnar Darcidus determined that his purpose for the rest of his life would be to enslave or butcher every last fey he could find.  He would ensure that they would suffer a fate equal to what they put him and his family through.

From that point forward, he-

“Hmmm, what?”  The man shook his head, freeing himself from a daydream.

“Oh, yes.  Of course.”  He snapped his fingers.  “Have the men ready my armor.  I think now is the appropriate time.”

“Right away, Your Grace.”

Incredible trial and hardship can do two things to a man- strengthen him for the future, or crush him entirely.  It is often the method by which incredible heroes are made, and the same method by which history’s greatest villains are crafted.  It makes men powerful and resourceful, wise and charismatic, determined, persistent, and persevering.  It also makes them cunning, ruthless, savage, and unscrupulous.  Rugnar Darcidus was all of these and more.

Rose petals fell on his face and frame when he stepped out from his inner sanctum.  Throngs of people from one end of his burgeoning empire to the other were now gathered at the foot of a magnificent castle that towered over Lake Tiberus, much taller than the hills nearby.  But he was apart from them in this holy place, the place where he’d built his palace, a place that had always been his home.  And the stones in front of him from which he would address his servants stood on the very ground where Marick had fallen, the same ground from where he’d dragged himself three decades before.

The great magus Ziarusk bowed as he stepped out of his master’s way.  A multitude of the emperor’s closest companions did the same, all smiling wide when he took the balcony floor.  He appeared before his people for the first time, draped in dark armor forged in volcanic fire and blessed by a thousand magi.  They cheered for a very long time as he watched over them, but a single wave of his arm brought them to silence.  He cleared his throat.

“Friends, brothers, sisters…. indeed.  As many of you know, for a very long time, I was without family.  I had no mother, no father, no sisters or brothers, yet I carved a place for us in this world and have grown it into a shining gem, a beacon for all mankind.  And now I stand here today, looking out over all of you and I wonder, what more is there?  Surely, I have missed something.

A great cheering erupted from among them once more, and he waited a moment before silencing them again.

“You know, a great man once told me, “There are times when your strength alone will not be enough.  That’s what family is for.”  I almost scoffed at him, but he was right.  There have been times when I needed others, and this is a time where I need all of you.  The fey are finally pushed back to the brink of the world.  The only thing that remains for them in all of Illyria is Feylanor, their last bastion.

“You all say that I am a great man, but I am only one man.  Truly, I can do nothing.  It is all of you who make me great.  Every last one of you.  And now I need your help in driving out the last of these beastly people and ensuring that the tragedies which befell us in the past are not repeated.  With your help, we may finally know peace!

“So, won’t you stand with me, brothers and sisters?  Won’t you stand with me and help me to rid the world of this plague that is Fey?  Be my eyes, be my ears, and be my hands!  With you by my side, with you as my family, we can finally see an end to the menace!  For our children!  For our future!  For Darcidia!”

“For Rugnar!” they all shouted in return.  They kept chanting his name throughout the palace, the castle, and the city, and they would shout it across the whole empire.  As for the man himself, Rugnar stepped back from the balcony and turned to his compatriots.

Lady Steele gave him a curt nod, hands resting on the pommel of her sword.  Caiachus gave him a thumbs-up, arms still folded across his chest.  Ziarusk made a soft smirk, quietly chanting ‘Rugnar, Rugnar, Rugnar’ while Adamant and Prasha shot words of approval.

The emperor looked at all of his friends, then thought about the imminent destruction of the fey race.

The biggest smile crept its way across his face.